The only sea story that I recall at this time is when we would patrol the Korean coastline we would put a line and baited hook over the side and would catch a shark. All the available hands that we could get would pull it on deck and kill it. We had a sailor cut the jaws and get the teeth. When we hit port in Japan and we would take the teeth and have necklaces made out of them. 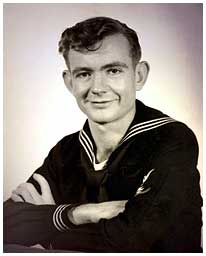 My Childhood Spent in the Navy

Wet behind the ears, and needing my parents signature, I enlisted in the navy for three years, in September 1947.

My first look at the Navy Recruit Center in San Diego was almost enough to make me cry. As the bus carrying some fifty of us entered the gates, we could see and hear young boys with shaved heads sitting atop fire hydrants, flapping their arms and shouting “I am a shit bird”, and for three months, it never got much better. I quickly had to learn the fine art of finagling.

After an eternity of insults indicating that my position was lower than whale excrement on the bottom of the ocean, I finally graduated and moved down the street to the Navy School for Radiomen, a sixteen week course which found all of us learning to type, and reading street signs in Morse code like ‘dit dit dit – da – da da da – dit da da dit’. STOP.

While in school, I requested sea duty on board a destroyer. God in his perversity, gave it to me in the form of the U.S.S. Mansfield DD728. I traveled all the way from USNTC San Diego to the Destroyer Base in San Diego.

When I boarded, the Mansfield, having just returned from China, was undergoing some minor repairs and a majority of the crew members, most having seen WW2 duties, were being discharged, leaving the care of the Mansfield in the hands some new and clueless people. Our commanding officer was Commander E. H. Headland, who became affectionately referred to as “Puking Harvey” for his propensity to get pretty sick at sea.

Needless to say, I served with some of the greatest friends anyone could hope for, most of whom I either totally lost track of, or read of their passing on the Mansfield site. One might say that although I took pride in my work, and the many friendships that I made, I was not a model citizen sailor, and spent most of my time ashore trying to look like the stereotypical drunken sailor, that popular books and movies portray. I was counting the days until the end of my three year cruise in September of 1950. Then we sailed for Japan, just as the hostilities were building up in Korea.

As luck would have it, Harry Truman froze enlistments, the Mansfield first played Sitting Duck at Inchon, a sea going hearse to return the body of a downed enemy aircraft pilot to North Korea, and then, in a gung-ho spirit, played minesweeper. On a mission to rescue a downed pilot off the coast of Korea, a mine virtually removed our bow, causing the commanding officer of the U.S.S. Lyman K. Swenson, which was following in our wake, to radio our skipper something to the effect that we were “the best damn mine sweeper that he had ever followed”.

By the time we returned to the states for repairs (Bremerton Washington), the military services were offering a re-enlistment bonus that I couldn’t refuse. Woe was me, about the time the ink dried on my reenlistment papers, the freeze was removed, and I was looking at another four years of service. In short order, a return to Japan/Korea, home again, and a long weekend extended without permission, a Captain’s mast by Commander McGillicudy, reduction in rate to RM3 and a loss of pay, then the transfer to shore duty for two years at Fleet Sonar School San Diego, Commander Fleet Training Group Pacific, at the conclusion of which, I had only six months remaining and was hoping to remain in San Diego.

But no, fate was not through with me yet. I got orders to Fleet Training Group, Yokosuka Japan, and it got worse. I was ordered to Subic Bay (Olangapo PI), the armpit of civilization, to setup a radio communications station to interface with fleet training exercises in the Philippines. The fleet never showed, and there I sat with NOTHING to do except watch PX supplied movies for six months. You had to be there to believe it. On my very first evening after reporting I was invited to a few hours on the town in the company of a MUSTANG Lt. Commander, who was commanding officer. To make a long story short, WE Partied!! I drove his vehicle over a large boulder and destroyed the transmission. Definitely not a good way to win friends and influence people. Still at Subic, as my discharge date approached within 10 days, I was sent back to Yokosuka, then by Canadian Pacific Airways to Vancouver BC, arriving at Pier 91 Seattle on the exact day I was supposed to be discharged. I was actually discharged four days late.

It took a while for me to get rid of the bitterness that I felt for the navy, but finally, after a couple of months, a full commander from the eleventh naval district in uniform, scrambled eggs and all visited my home. The navy was undergoing a manpower crisis with so many people electing to get out, and his assignment, was to convince me to re-enlist at rate with a cash bonus. I was not nice!

Formosa patrol to keep the Chinese from taking Taiwan. They are still trying.

A funny incident in Long Beach. We had an open house and the BM piped “watch your languange, there are ‘censored’ aboard!”. Everyone laughed, even the ladies.

While we were loading ammo at Seal Beach, one of our geniuses pulled the pin on an explosive grenade in the aft compartment. It got hot so he dropped it. We were lucky because we were passing hedgehogs at the time. Apparently, there was no damage at that time. The next morning one of the sailors involved couldn’t be woken up. He was sent to the Navy hospital and we heard later that a small piece of sharp metal wa in his brain and he was paralyzed on the right side. He was from Arkansas. Maybe some other shipmates remember this incident.

Long Beach traffic took a tragic toll on us: out of 214 crewmembers, we lost three. Our two IC men dropped some girls off in the beach area and got turned around when leaving and drove off the cliff to the beach. Both were killed. I was PO of the watch when the report came in and entered it in the ship’s log. One was named Buftin and was from Indiana and I don’t remember the other name. Another didn’t make the traffic circle in Long Beach and hit a light pole and was killed, again, I was the PO of the watch and entered it in the ship’s log. I don’t remember his name either, but he was a snipe.

A host of memories. As a young lieutenant, and with Cdr Smythe’s demands on me as XO and Navigator, my days ran 16-18 hours. The tour lasted 13-14 months. Running a ship with less than one-half of its wartime complement presented problems, especially in our ability to man and fire the guns. The magazines were mostly filled with bags of mail. Our mail run took us from Tsingtao to Shanghai(that trip up the Yangtse and down the Whangpoo was a real challenge) and on to Hong Kong. Then to Buckner Bay in Okinawa and over to Sasebo in Japan and back to Tsintao (We always dropped the hook there on a bearing of Pagoda Pier). I don’t recall ever shooting any of the guns. Mansfield was called twice, along with a cruiser (LA ?) to Tsingtao (where we had 5,000 US Marines) to stand by in support if Mao and his commies made a move to attack them. Fortunately, they stayed clear of the city and we had no role to play. I recall manning one of the 5″ guns myself and elevating and training it in Mao’s direction. All guns elevated may have been a deterrent. But, as I have already stated, my Mansfield tour was a tremendous learning experience. From there I went to command the USS Wheatear(AM390).That tour made me so aware that there is no job as satisfying and fullfilling and challenging and exciting as COMMAND AT SEA.

PS – Our tour lasted over a year, and I don’t recall serving in any other assignment quite as demanding as my tour on 45-47 tour on Mansfield. I must also acknowledge that I had as a trusted shipmate and helper in navigation, Chief Hamilton. Is he still with us?