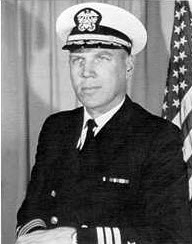 Captain Anderson was born in Racine, Wis., the son of Victor and Leonora Anderson. He graduated from Washington Park High School in 1947, and then from St. Olaf College in Northfield, Minn., in 1951, with a B.A. in chemistry.

Immediately after graduation he entered the U.S. Navy and was commissioned in 1952. After sea duty aboard a destroyer and a minesweeper, he served as flag lLieutenant for Commander First Fleet, and then as special project assistant to the Chief of Naval Operations, ADM Arleigh Burke.

After earning a B.S. in electrical engineering from the Naval Post Graduate School, he served mainly in guided-missile billets ashore and afloat. He served as assistant weapons officer in USS Topeka(CLG8) and executive officer of USS Lynde McCormick(DDG8). His next tour of duty was as test officer at the Naval Ordnance Missile Test Facility at White Sands Missile Range, N.M., during which time the Navy consolidated all surface missile testing there, firing about 90 missiles a year.

In 1966, he was ordered as weapons officer of USS Little Rock(CLG4) in Gaeta, Italy, where the ship served as the flagship of the U.S. Sixth Fleet. He then assumed command of the USS Mansfield (DD728). Mansfield was ordered to the Seventh Fleet in September 1969, and supported the Army and Marine Corps ashore in Vietnam with naval gunfire. He was awarded a Bronze Star with Combat “V” and a Republic of Vietnam Navy Distinguished Service Order while in this command.

He was assigned as system engineer in the AEGIS project office from 1970 to 1975 and was awarded the Legion of Merit for the completion of the design reviews and successful testing of the Aegis prototype in USS Norton Sound. He next commanded the Naval Weapons Station in Seal Beach, Calif., and then the Naval Weapons Center in Dahlgren. He was awarded a Gold Star in lieu of a second Legion of Merit for his leadership in merging the Dahlgren and White Oak laboratories into a unified center of excellence in support of AEGIS, Tomahawk, and the Strategic Ballistic Missile Program, among others.

After retiring from the Navy in 1981, he established his residence in King George and continued his career in naval engineering with Advanced Technology Inc., a small firm that became a part of Northrop Grumman, retiring in 1996. He was elected president of the King George Chamber of Commerce in 1983, and was elected the first chairman of the Bay Consortium, a government/industry organization consisting of representatives from 15 counties and the city of Fredericksburg, founded to execute the Job Training Partnership Act of 1984. In 1988, he was voted Citizen of the Year of King George County for his volunteer efforts in the Consortium, and for his initial work in getting the Potomac Gateway Center established in King George. For 12 years he served as a volunteer counselor at the Retired Activities Office on the Navy base at Dahlgren. Publications include “The Weak Link” in the United States Naval Institute Proceedings. Lifetime memberships include the United States Naval Institute, Military Officers of America, the Navy League, the Surface Warfare Association, and the Veterans of Foreign Wars. He was a member of Peace Lutheran Church, King George.

He was a devoted husband, father and grandfather and is survived by his wife of 56 years, Carolyn; daughters Julie Couse of Woodstock, Ga., and Kathy Begley of Quinton; sons Paul (Alison) of Centerport, N.Y., and David (Diane) of Fredericksburg; and grandchildren Ian Anderson, Jakob Anderson, Samantha Anderson and Rebecca Anderson. He was preceded in death by his parents and his sister, Janet Svendsen, all of Racine; and his sons-in-law, Jim Begley and Rick Couse.

The family will receive friends from 6 to 8 p.m. Tuesday, Feb. 18, at Nash & Slaw Funeral Home, King George. A funeral will be held at 10:30 a.m. Wednesday, Feb. 19, at Peace Lutheran Church, King George, with the Rev. Terry Naumann officiating. Interment will follow at 1 p.m. in Quantico National Cemetery.

In lieu of flowers, memorial contributions may be made to Peace Lutheran Church, 5590 Kings Highway, King George, VA 22485 or to the United States Navy Memorial, Box 96570, Washington DC, 20077.