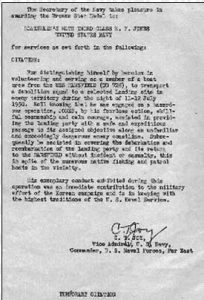 The Secretary of the Navy takes pleasure in awarding the Bronze Star Medal to:

for services as set forth in the following:

For distinguishing himself by heroism in volunteering and serving as a member of a boat crew from the USS MANSFIELD (DD 728), to transport a demolition squad to a selected landing site in enemy territory during the night of 11-12 July 1950. Well knowing that he was engaged on a hazardous operation, JONES, by his fearless action, skillful seamanship and calm courage, assisted in providing the landing party with a safe and expeditious passage to its assigned objective along an unfamiliar and exceedingly dangerous enemy coastline. Subsequently he assisted in covering the debarkation and reembarkation of the landing party and its return to the MANSFIELD without incident or casualty, this in spite of the numerous native fishing and patrol boats in the vicinity.

His exemplary conduct exhibited during this operation was an immediate contribution to the military effort of the Korean campaign and is in keeping with the highest traditions of the U. S. Naval Service.